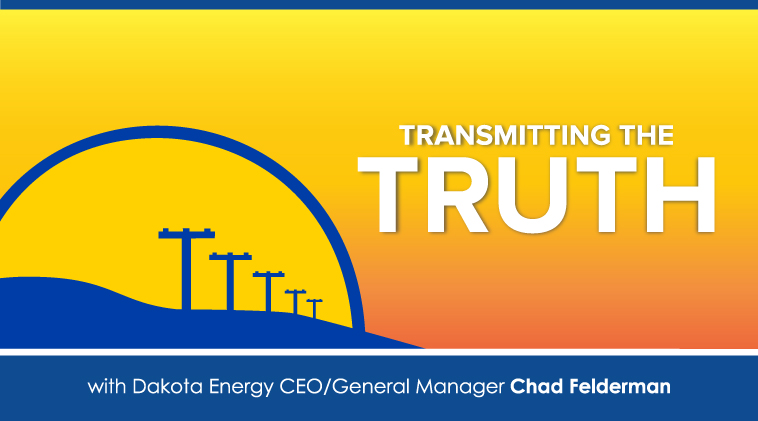 East River has been preparing for this lawsuit from the moment Dakota Energy requested a buyout number two years ago. They have attempted to shift the focus and raise concerns to deflect from the issues that are at the heart of Dakota Energy’s decision to explore other options. The Q&A below should help address many of those concerns.

Q: What is Dakota Energy’s concern over the contract?
A: These agreements that run through 2075 have been abused as a pass through for the annual $100 million loss of the for-profit Dakota Gasification plant in North Dakota. Dakota Energy’s member–owners’ money has been entrusted to East River and Basin to make wise and beneficial decisions. They have not done so. Dakota Energy wants East River and Basin to honor its contractual commitments. Dakota Energy and other members should not be held captive to continually inflated rates as a result of bad investments made by Basin.

Q: What about the money East River returns or gives back to the Dakota Energy community?
A: The only money that East River is returning was from our member-owners in the first place. Capital credits represent each member’s ownership of the cooperative. They are the margins credited or allocated to the members of the cooperative based on their purchases from the cooperative the previous year. These margins are used by the cooperative as capital to operate the business for a period of time.

Q: Who is Guzman Energy and why would Dakota Energy leave a non-profit cooperative in favor of a for-profit company?
A: The power market has changed dramatically in the last decade. Enormous quantities of power are bought and sold on the open market, rather than pursuant to multi-decade long contracts. In fact, Basin is currently buying more than 25% of the power it supplies to others on the open market because it’s much cheaper than the power generated by its outdated coal plants. Companies like Guzman Energy are experts in power markets. They buy the energy and re-sell it to cooperatives like us at much cheaper prices than Basin can offer.

Dakota Energy has entered into a Letter of Intent with Guzman Energy headquartered in Denver to buy power directly. This transaction hinges on whether or not Dakota Energy can successfully exit from East River with a fair and equitable exit fee and reach an agreement on key power supply elements that are most important to the community.

Q: Is Dakota Energy the first cooperative to do this?
A: Dakota Energy is not alone. Across the country, electric cooperatives are seeking a better deal for their member-owners—and they’re doing so successfully and without causing financial harm to the other cooperative member-owners. For example, in New Mexico, Kit Carson Electric Cooperative (Kit Carson) reached a fair and reasonable exit fee with Tri-State Generation and Transmission.

After Kit Carson pays off their exit fee over the next couple of years, their expenses will decrease an expected 40%. There is a similar success story in Colorado, with Delta Montrose Electric Association having recently reached their exit fee agreement with Tri-State. Both cooperatives now have the ability to contract with other power suppliers who will help them keep their electric rates stable, low and provide what Dakota Energy has been seeking—freedom to determine and own their energy future.

Have questions or want to discuss our recent actions? Call us any time and we would be happy to set up time to sit down: 605-352-8591.

Privacy & Confidentiality | This institution is an equal opportunity provider and employer.