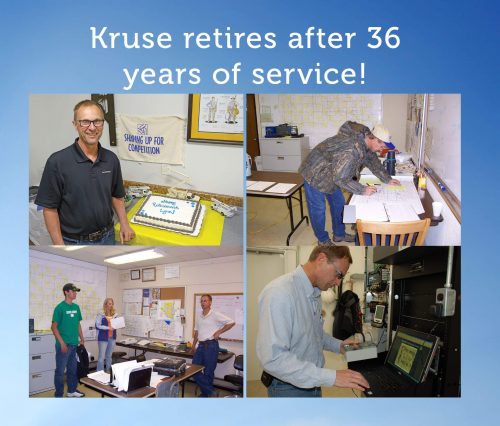 Lynn Kruse, Manager of Operations, retired from Dakota Energy on May 31, 2022. He is excited to start the next chapter in his life, but sad to leave his “DEC family.”
His career began in the cooperative world after graduating from Mitchell Technical Institute with a degree in Electric Construction and Maintenance. Lynn’s first job at Beadle Electric was an apprentice serviceman in March 1986. He worked in the Member Services Department earning his journeyman electrician license in 1990.

In April 1990, Lynn transferred to the Operations Department as an apprentice lineman. Two years later, he achieved journeyman lineman status where he worked until January 1997.
After the consolidation of Beadle Electric and Ree Electric to form Dakota Energy in 1995, former CEO/General Manager Robert Rademacher promoted Lynn to the position of Area Manager of the Miller office where he remained until 2002. Upon the retirement of Line Superintendent Larry Brink, he was again promoted to the Line Superintendent/Manager of Operations responsibilities.

Some of Lynn’s memories include several major storms that happened over the years. The first one happened the second day of employment at Beadle Electric when a two day storm hit the town of Esmond. He was sent to work with Line Foreman Dick DeLong.
There are five major storms he remembers, but the most memorable one was in 2005. The storm hit the day after his son, Adam’s wedding. So instead of enjoying watching the newlyweds open wedding presents, Lynn was busy directing the crews, securing materials and tracking the restoration progress. It was also one of the first storms where eight of the eleven substations in our territory had no power.

Lynn stated that due to the large service territory, usually a major storm will affect one side of the service territory more than the other side.
Over the years, Lynn has been a mentor to the young employees under his supervision. He reminded them to study hard.

Some of the major improvements over his years of employment:
• Safer and bigger equipment
• Bucket trucks versus climbing poles
• Work on live lines versus cutting the power
• Electronic versus paper maps
• Save time in assigning jobs with Automatic Vehicle Location
• SCADA equipment to remotely open and
close switches at the substations

Lynn was known for his dedication to the cooperative and going the extra mile! If something needed to be done, Lynn was ready for the challenge.
Lynn and his wife, Amy, have moved to Sioux Falls to be closer to family. He will enjoy spending more time with his kids and grandkids

Privacy & Confidentiality | This institution is an equal opportunity provider and employer.